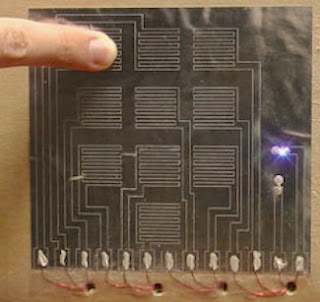 Chemistry World reports that a team of US and French researchers have developed a capacitive touchpad interface made from foil-coated paper.

They say the paper is an inexpensive, industry-standard material. By using a laser cutter to create tiny, bridgeable gaps in the foil, they can produce a simple, flexible touch-interface suitable for even disposable applications.


The touch pads are made from metallised paper - paper coated in a layer of aluminium around 10nm thick, which is overlaid with a thin film of transparent polymer. The paper is produced commercially and is used for shiny labels on beer bottles, or for glossy book covers, for example. And it is inexpensive at around $0.25/m²....

[Harvard University's Aaron] Mazzeo says that the paper touch pad will really come into its own when the power source and associated electronics also become cheap, flexible and disposable. Nevertheless, there could still be applications for the touch pad as it stands. One possibility would be for security on packaging. A cardboard box could incorporate a touch pad, with the electronics - retrievable and reusable - inside. The box could be opened legitimately only if the correct code was keyed in, otherwise the internal chip would detect interference.