Assuming this trend continues, retail video gaming revenues in 2012 could be lower than the $12.6 billion earned in 2006...the first year for Sony's Playstation 3 and Nintendo's Wii, as well as the first full year of sales for Microsoft's Xbox 360.

Those were the worldwide numbers; US figures were nearly as bad. And if you check back a few years, you'll quickly discover these early 2012 results are not exceptional... 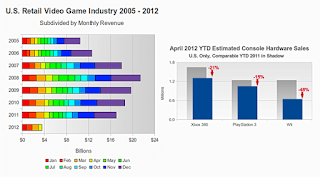 ...clearly, it's part of a trend. Even so, analyst Matt Matthews says many industry experts were stunned by this news.

Not only was the decline in sales worse than most predictions (avg.~23%), but NPD's analysis also reveals no significant growth in any segment of the gaming market. Accessories sales were the sole exception, there, with a paltry 0.5% increase (to $148.6 million) that looks suspiciously like a junior accountant's rounding error.


Yes, MobilePhonesFan found a few bright spots in the report; but overall it's hard times ahead for console makers and game vendors. Hit our source (below) for more excruciating details and a boatload of statistics.


via: gamasutra
Posted by Mobile Phones Fan at 10:48 AM