Less than 48 hours after learning their 'exclusive' new Android application had escaped into the wild, the folks at Flipboard hurriedly rushed to deliver...a free update.

For those coming in late, here's the story.:

A clever Android fan stole liberated Flipboard's app from a Samsung Galaxy S3 demo unit, at the recent 'Samsung Unpacked' event, in London. If you installed that APK and you're a registered Flipboard user (ie: you have a login), then next time you boot the app you should see a push-notice like this one.: 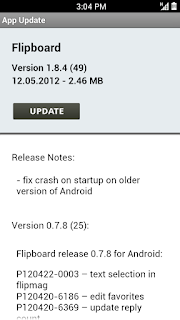 ...or, if you really hate to wait, the new Flipboard for Android update APK is available for download via Dropbox (below). But please, read to the end of this post first.

This latest version (v1.8.4) is said to improve Flipboard's widget features, plus fix start-up crashes "on some earlier versions of Android" -- whatever that means. We had heard scattered complaints that Flipboard's widgets were non-functional.

However, the update could be buggy, too. Early reports indicate it won't install on some phones, period. In our case, it won't load mainpage art and continually requests a Facebook login, even if no FB account is registered in Flipboard's Settings.

MobilePhonesFan's advice: if the original, as-ripped APK (v0.7.17) works on your phone or if you don't have a Facebook account, then skip update v1.8.4. With a crazy popular app like Flipboard, you know another update will be along, shortly.

Update: (22 June) Official version has now been released! Should be a great update -- they're promising to collect feeds from Google Plus and YouTube. Here's the Flipboard page in Google's Play Store. Enjoy!

Posted by Mobile Phones Fan at 5:33 AM