Don't feel like waiting for Jelly Bean to reach your device? You're in luck; XDA vet appelflap has ported the original AOSP version for use with any Ice Cream Sandwich device... 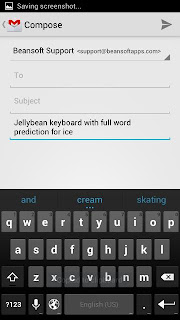 As usual with early versions of a ported app, there are some known issues. For now, the user dictionary hooks are switched off. Also, please note that both the 'normal' and 'bigram' prediction are currently supported for just six languages: Brazilian Portuguese, English, French, German, Russian, and Spanish. Of those, only English has full predictive function.

The app's Play Store page is linked below, along with a temporary Dropbox link. Again, remember that any ported app is a work-in-progress -- expect some glitches. Also, if downloading from Dropbox, please note that with some Android phones you must rename the installation file, changing the file type from 'apk' to zip'.

You might also want to try the new Jelly Bean 'Sounds Search' app. This is a music identification widget that ties into Google Music, offering handy one-click ID of the song you're playing. The widget displays artist details, (thumbnail) album art and pricing, along with a direct link to the Google Play Store, for easy ordering of any song or album.